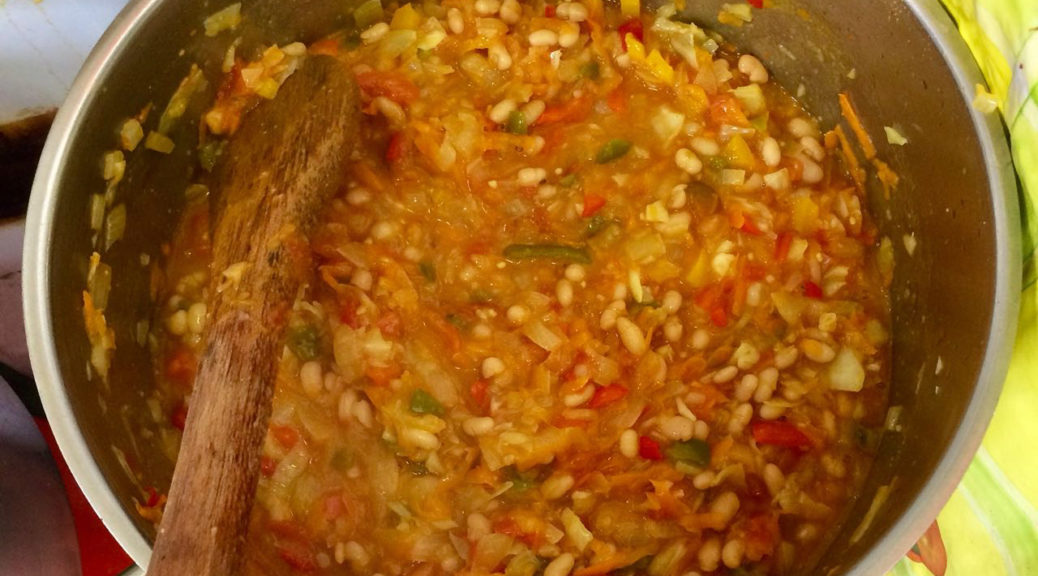 The cuisine is not rated as a gourmet cuisine in this country and as such it is very much a home cuisine that you will not find easily in our restaurants.  As 80% of our population are black, it is really important to sample this cuisine if you are wanting to experience a taste of our local cuisine!

The staple diet of our people is maize. For the vast majority of tribes, the main ingredient in all meals is what we call Mielie Meal. This is quite simply dried corn that has been ground down to a fine powder (similar to Polenta – but white). For breakfast, most people would cook it into a porridge that is so stiff that it eventually starts crumbling – this is called krummel pap (this literally means crumbly pap). This is usually eaten with sour milk and sugar. For lunch and dinner people eat “pap”. This is a fairly thick porridge and it forms the starch base much as rice or pasta would in Western cuisine.

The exception to this are the Xhosa people (from the Eastern Cape). They eat samp.  Samp is quite simply dried corn that has been cracked into a few large pieces. 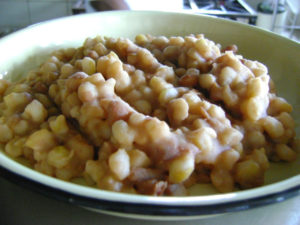 Dried corn and dried beans are used to make the traditional samp & beans combo – it keeps you full for many hoursOften the samp is combined with dried sugar beans for additional protein.   In the rural areas, ladies will cook the samp & beans in a black pot over the fire. It takes many many hours to cook – thank heavens for Western cooking techniques – now it only takes about 3 hours on a gas stove to prepare! Most of the black people in Cape Town are originally from the Eastern Cape and have moved down here over the last 100 years. As such a lot of samp is eaten in Cape Town!

The consistent dietary theme across all of our tribes is the love of meat – NYAMA! A meal is not considered a meal without meat. As such meat or a meat stew is served with lunch and dinner if you can afford it. In the township areas one of the main take away dishes is meat from BBQ’s (called BRAAI’S in South Africa) on the pavements. People will stop and buy a piece of chicken or a lamb chop or a sheep’s head. Yes, you read correctly. Sheep’s heads are considered a delicacy by the Xhosa people and are called “Smileys”. The name comes from the fact that when you cook the sheep’s head – you will know it is ready when the lips curl upwards – it smiles at you!!!

Chakalaka is a spicy vegetable relish that is often served with the pap/samp and meat stew. There are many variations of this recipe – often it uses up the left over vegetables you have in the house and is usually quite fiery!  Always tread carefully when you serve it and remember it is supposed to be a relish – not a side vegetable to be eaten in large quantities!

Vegetables are not eaten in large quantities traditionally.  This is however changing as people are becoming more and more aware of the nutritional benefits of eating vegetables.  In the Cape Town townships you will generally find that the most commonly served vegetables would be spinach and cabbage which are traditionally cooked together.

A traditional “drink” to try would be umqombothi.  The only way you are going to be able to try this one is if you head into the townships and to a shabeen.

Drinking African Beer made from Maize (umqombothi). Umqombothi is used to celebrate the home-coming of young men in Xhosa culture, after initiation and ritual circumcision. The young men are known as abakwetha. The beer is also important when someone is intending to contact their ancestors (known as amadlozi). It is often used during customary weddings, funerals, and imbizos.  Today you will still find it in the Shabeens in the townships with mainly the older men gathering to share a large can.  This beer is always shared and you pass it on around the circle.  It costs around R20 for a tin with around one litre of beer!  Great value for money.   It is considered rude to not share – so make sure that once you have a sip you pass the tin around!   During apartheid the sale of liquor was banned in many of the black areas and as such this traditional beer became part of every day drinking in many communities.

A small glossary of useful words for use in the Cape (home to the Xhosa tribe):

Shisa Nyama – a Braai – a traditional South African BBQ.  Note that our black community enjoy the meat well done!  On any weekend you will find braai’s set up on the pavement – you chose your meat and braai it yourself.   There will often be a liquour outlet close by where you can buy a nice cold beer to go with it!

Umleqwa – these are the traditional African free range chickens – they live a life of freedom – so they are as tough as all hell!  They are also delicious!  They however need many many hours of cooking to make them tender.  In our townships you can buy them fresh – yes – they are usually still alive next to the side of the road and you then can get it beheaded and plucked!

Wors/Boerewors – this is eaten by everyone in this country.  Wors means sausage.  Boerewors means farmer sausage.  This is a traditional Afrikaans sausage that is best cooked on the Braai! (BBQ)