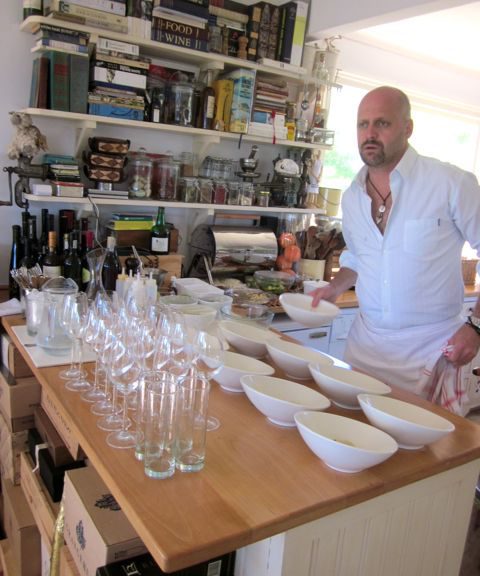 Sadly the Flagship has closed down – but I will leave this blog here as a tribute to my friend and favourite Chef ever – Bruce Robertson.

It all started with an email saying that top South African Chef Bruce Robertson was launching a Table D’Hote in his home in Scarborough.  I googled it and found it was a dine at home concept – so I interpreted it as a dine at home restaurant and immediately released a blog saying that he was launching a new restaurant in Scarborough.  Little did I know the chaos that blog would unleash!  The mayor and the police turned up to check it out and to tell him he could not open a “restaurant” in Scarborough!  He invited them in and while they were sitting at the dining table having coffee he told them that they were sitting in the “restaurant” – he planned to offer home dining!  I received a call to say “please take down the blog!”  ……….and oddly enough this started our friendship!  I am a foodie and had of course followed him through his various restaurants, but only got to really know him when I become a devotee of his Table D’Hote!  Being a foodie guide I swung as many foodies past his door as I could!   Soon the space in Scarborough became too small and Bruce and his partner started looking for a new home where he could host up to 16 people for a five course lunch paired with wines.   Being on the sea the theme was always fish, the use of local ingredients and sustainability.  The magic of the concept was the interaction with the chef due to his plating everything in front of you and introducing each course.  It was truly Happy Days for the Boat House and the new Flagship.

Sadly Chef Bruce passed away a few weeks ago very suddenly.  The impact was felt across the Cape Town foodie fraternity as well as by his huge group of his friends.  The man touched so many people and was truly loved by so many.  He was the most energetic and vital person I knew.  Quite simply he was 10 tons of passion and someone who could not sit still.  I know deep in my heart that Bruce would have wanted his legacy to carry on and I can actually picture him toasting his friend Chef Duncan for stepping up to the plate.

The Flagship offers visitors the opportunity to book for a 5 course lunch paired with 5 wines prepared by top local chef Duncan Doherty.  Duncan brings with him many years of experience and his own signature style.  During lunch you have the opportunity to relax and either watch the sea views or watch Duncan preparing and plating all of the courses in front of you.  Chef Duncan welcomes you to take photos or ask questions or learn more about the stocks and sauces and ingredients while you are there.

The last time I saw Chef Duncan was when he owned and cooked at his bistro called  Cotage Fromage in the Franschhoek valley.   It was always a favourite of mine.  Over the years he has had his thumb in a number of local Franschhoek restaurants.  He hails from Franschhoek ………..but if you dig further back, he departed from England 20 years ago and headed for our sunshine!  Never to return!

NOTE THE FLAGSHIP CLOSED DOWN END APRIL 2016 – they were renting the property and sadly the owners gave them notice.   It is the end of an amazing foodie experience and Bruce’s legend. We miss you Bruce and hope you are having “happy days” in the skies above us.